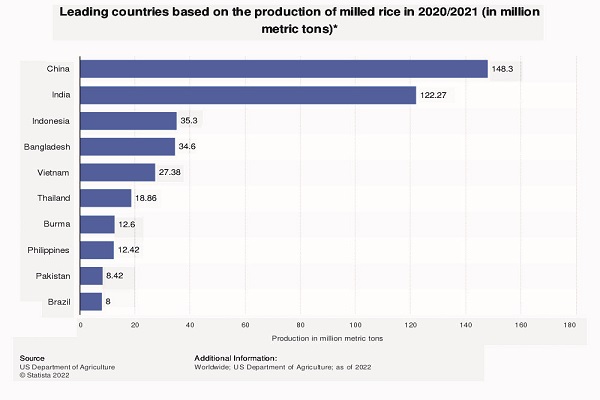 In Africa, rice is a staple food. But its people rely heavily on imported rice from Asia that is of superior quality. Of recent, however, there have been moves to upgrade milling technology to enable the processing of local rice so it can compete with imported variants. DANIEL ESSIET reports.

Rice is third most important cereal crop in the world after maize and wheat.

According to the Canada-based International Grains Council, global rice production is projected to peak in the next five years, thanks to yield improvements in Asia and sub-Saharan Africa(SSA).

Also, population growth, the Council added, would push world rice consumption to a record high by 2025/2026, and trade is projected to go higher, led by rising demand in SSA.

This was attributed to the favourable climate, characterised by humid and sub-humid environments, rain-fed lowlands, and deep water/floating rice environments.

Still, domestic consumption is still being met with imports.

According to the International Trade Centre (ITC) statistics, African rice imports accounted for $23,189.9 million in 2019 with Cote D’lvoire, Benin and South Africa being the main importers.

While suitable climate is encouraging rice production, there are fears that it is not enough for adopting new practices to boost supply.

Statista, a leading international research firm, observed that the demand for good quality parboiled rice is high in many parts of Africa.

Across the rice value chains in West Africa, production deficit has been growing with  consumption increasing under the triple effect of population growth, urbanisation and rapid changes in diets.

Hence, there is a need to bridge the supply gap.  For this reason, the Coalition for Africa Rice Development (CARD), an initiative started by the Japan International Cooperation Agency (JICA), Alliance for a Green Revolution in Africa (AGRA) and New Partnership for Africa Development (NEPAD), has been seeking to double rice production in SSA between 2020 and 2030.

To achieve this, experts maintained, would depend on the milling efficiency of the industry. Efficiency, they noted, is gauged in terms of  technology and capacity utilisation.

A member of CARD, the Federal Government is emphasising the establishment of rice mill clusters and mega food processing parks.

As a result of the implementation of CARD- inspired National Rice Development Strategy 1, which was later upgraded to the Rice Transformation Agenda Action Plan (RTA-AP) and implemented from 2012-2015,  the Federal Ministry of Agriculture and Rural Development said the national paddy rice production rose by seven million metric tonnes(mt) in 2014, thereby making the nation to reach 65 per cent rice self-sufficiency by 2015.

In furtherance of this, Nigeria has developed a new National Rice Development Strategy II (NRDS II) as  part of the implementation of CARD Phase 11. It is a 10-year (2020-2030) plan for achieving the government’s goal of self-sufficiency in  food and nutrition security, employment creation and wealth generation.

By 2030, the Federal Government expects the production of 66.6mt of breeder, 5,327.3mt foundation, and 426,184 MT of certified seeds with 80 per cent  of rice farmers using certified seeds. The other targets are for the 60 per cent of small to medium scale millers to be organised into clusters for effective interventions, and they should upgrade their machinery and capacity building.

Having supported the private sector’s drive to acquire integrated mills, the ministry purchased and sold modern small mills of between 20 and 50 tonnes capacities and de-stoners to improve the quality of cottage millers’products.

Over 58 new integrated rice mills have been facilitated through various policies of the Federal Government in the last seven years, according to the Central Bank of Nigeria (CBN).

According to experts, milled rice stays fresh much longer than un-milled varieties when stored under suitable conditions.

The CBN governor had said: “As we increase the milling capacity of rice nationwide, we are encouraging rice mills to embrace our backward integration programme and get involved in paddy production to guarantee sustainable supply of paddy to your mills and complement the supply from smallholder farmers.“

The  founder/Chief Execurive, Kereksuk Rice Farm, Rotimi Williams, told The Nation that though it was exciting establishing bigger rice mills, the major challenge for millers was getting sufficient supply of paddy for their mills. To enable the government achieve its sub-sector goal of becoming self-sufficient in rice production, Williams noted that more efforts should be channelled towards increasing capacity of smallholder farmers to produce more rice. Sustainable paddies, according to him, is a great factor to consider before establishing a rice mill.

Swiss multinational plant manufacturer, Bühler Group, is strenghtening the rice sector. Capitalising on the increasing demand for rice on the continent, the Bühler Group  has been a technology partner in processing and reprocessing across Africa with orders of over $50 million.

Bühler has experienced significant growth  on the continent in the past two years. The company has played a prominent role in the 32-metric tonnes per hour rice mill being built by the Lagos State Government.

The Commissioner for Agriculture, Abisola Olusanya, said the project was expected to be delivered by the end of the year. The rice mill has a capacity to produce 2.8 million bags of 50kg rice yearly, while generating 1,500 direct jobs and 254,000 indirect jobs.

Another positive news is that BUA Foods Plc wants to explore opportunities in the rice  market through processing, handling and storage. The company is starting operations at its rice milling plant with the capacity to produce 200,000 MT yearly.

In Rwanda, the rice sector development has a significant bearing on national food security and the country’s ambition on social transformation through agriculture.

Deficit in domestic rice production, experts said, compels consumer markets to import up to about half of yearly demand.

Once,  Rwanda’s  demand for rice  was estimated at 145,000 mt yearly, while national supply accounted for about 40 per cent, creating a deficit that is met with imports, the Ministry of Trade and Industry stated.

In 2020, much of the rice was imported from Tanzania, which accounted for 63,311 MT worth $38.2 million (about Rwf38 billion), or more than half Rwanda’s rice import bill. However, rice processing companies such as  ICM Rwanda, NAVR Limited, Dukorerehamwe Company Limited, COTICORIZ, Nyagatare Rice Company, and Alfa Supply Food Company Limited are helping to improve the quality of Rwandan rice.

The Ethiopian Government has received various supports to develop the rice sector.Through the CARD initiative, the Ethiopian rice production increased from 71,000 to 171,854 MT.

Sponsored by the African Development Bank (AfDB), as part of its Feed Africa Initiative, TAAT’s main objective is to improve the business of agriculture across the continent by raising productivity, mitigating risks and promoting diversification and processing in 18 agricultural value chains within eight priority intervention areas.

So far, more than 70,000 parboiled rice value chain have benefited from the GEM rice parboiling system in Benin, Côte d’Ivoire, Niger and Nigeria.