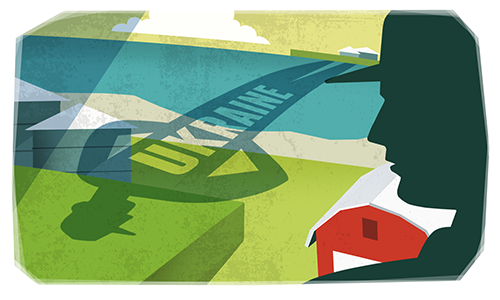 On April, 13, Interlegal, a Ukrainian legal company based in the city of Odessa, organized the webinar “Transport, Shipping, and Trade in Ukraine: War Update.” During the two-hour webinar, the speakers and participants discussed the logistical problems in international trade that arose due to the Russian invasion of Ukraine.

Below are the most important topics of the discussions.

The 2021 harvest was 106.4 million tons of grain and oilseeds, of which 43 million tons had been exported before the Russian invasion. With the domestic consumption of about 30 million tons annually, this means about 33 million tons of grain and oilseeds are stuck in Ukraine. Before the war, 90% of Ukrainian grain export was by sea via ports on the Black and Azov seas. Currently, three ports (Mariupol, Berdiansk, and Kherson) are under Russian control, while the Mykolaiv port is severely damaged. All Ukrainian ports are blocked with 85 foreign vessels stuck in them.

Of these vessels, some were loaded with the grain that was not fumigated, so there is a risk that after the end of the blockade, the grain on these vessels will be spoiled. There is no hope for the establishment of the “green corridors” for the foreign vessels to leave the Ukrainian ports as even before the start of the war, Russia didn’t provide a 24-hour window to allow foreign vessels to leave.

Because many vessels and containers were stopped en route to Ukraine, there is also a problem with imports. The closest foreign port to Ukraine, Constanta, Romania, is practically clogged with cargo and containers. The situation there is further exacerbated by Romania’s highly sophisticated customs regulations.

The only means to continue exporting goods and commodities at the moment are railroads and trucks.

Before the war, the share of export of agricultural commodities by railways was only 1%. There are 13 railway border checkpoints at the west border of Ukraine that can handle 270 cars per day, with a total maximum throughput of 560,000 tons. The main obstacle is the difference in the Ukrainian and European railway gauges that requires the change of wheelsets on each car.

Exporters are now considering the possibility to direct cargo trains to Trieste, Italy, via Slovakia instead of Constanța, although the cost per each container increases to 1800 to 1900 Euros. Also there is a possibility to route cargo to ports in the Baltic Sea in Poland and Lithuania. However, there are obstacles, such as the limited throughput of the European railroads that were not designed for the sharp increase of the freight transportation as well as the limited transshipment capacities at the Baltic Sea ports.

Theoretically, there is also the possibility to export goods and commodities via Ukrainian ports on the Danube River but, first, these ports are obsolete, and, second, most of the barges are blocked at the Kherson and Mykolaiv ports.

Once these ports become unblocked, they will still require significant time to restore them as well as the corresponding infrastructure including railways and roads. At the moment there are activities to construct the new facilities at the existing border checkpoints to increase their throughputs. This will allow Ukraine to export up to 1,5 to 2 million tons of grain and oilseeds products per month though it will constitute only 25% to 30% of the pre-war export capacities.

Yet, there is another obstacle to export by railroads in the form of the required phytosanitary certificates. While ships only require one certificate for the whole cargo, the railroad authorities require one certificate for each car (the same is true for trucks). This is costly, time consuming, and laborious. While the phytosanitary certificate is valid for 15 days, the cargo cars may be stuck at the border checkpoints for at least that amount of time. Therefore, the problem for the moment is not solved.

Anyway, it is expected that Ukraine will still be able to export 8 million tons of grain before July.

Prospects for the 2022 Season

According to some estimates, up to 30% of the agricultural areas have been mined and will need to be demined. The situation is worsened by the fact that these areas include the winter crops, so they will be dangerous to harvest.

Since more than 4 million Ukrainian refugees migrated abroad and the income of the Ukrainians that remained in Ukraine significantly dropped, the domestic demand for grain will also decrease by 10% to 15%.

Due to shortage of feed caused by the logistical problems (e.g., occupied territories, destroyed road infrastructure, processing facilities and storage) many farmers have been forced to slaughter their farm animals.

About the Author: Iurii Mykhailov is an agricultural journalist in Ukraine. He is a contributor to Successful Farming.