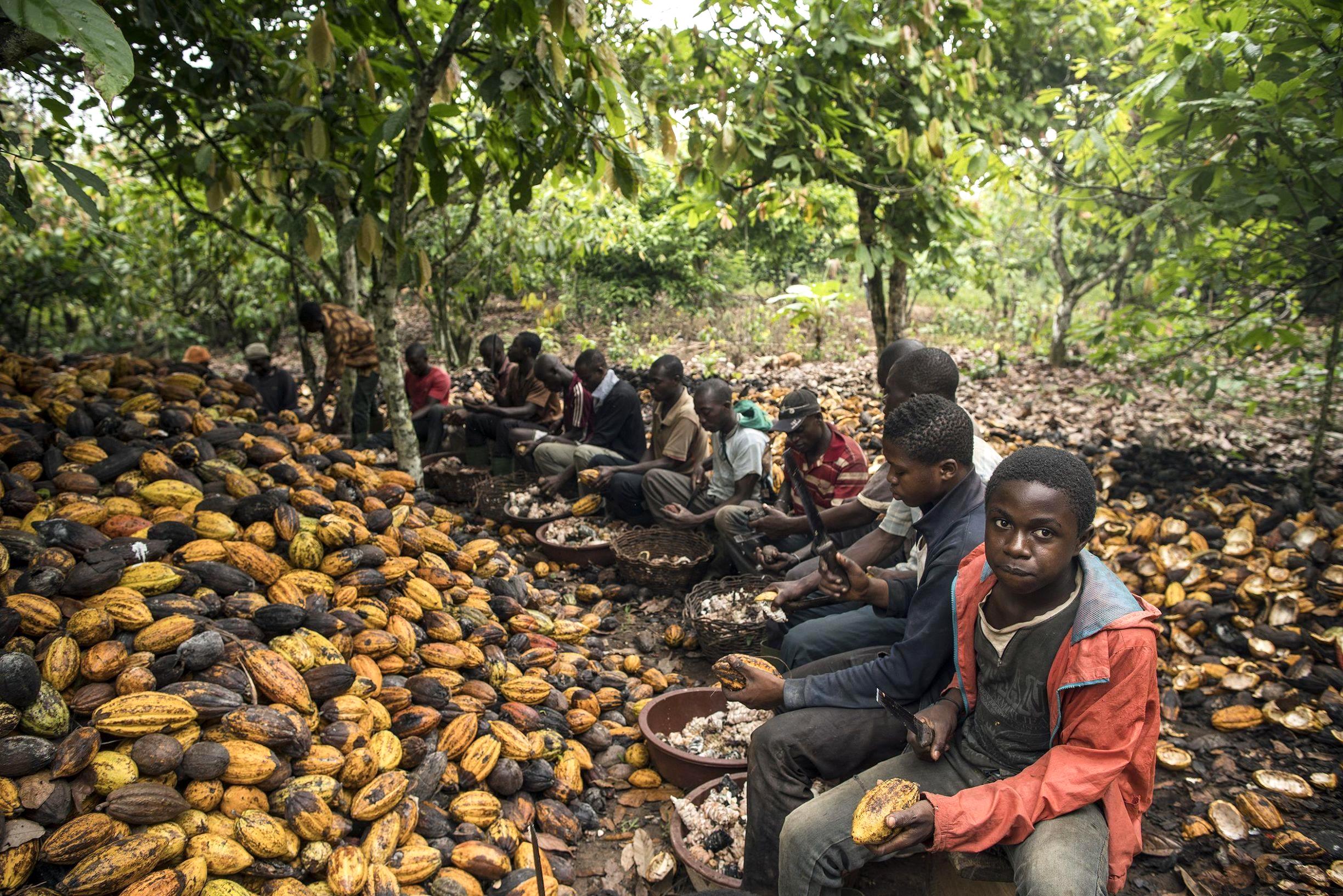 Côte d’Ivoire is the world’s top cocoa producer, but the country’s principal economic activity is driving devastating deforestation, which harms the environment and feeds the illicit timber trade.
Cocoa expert Simon Nanga told the ENACT organised crime project that farmers typically relied on natural soil fertility in virgin forests for high cocoa yields. Natural soil has better nutrients than already-farmed cocoa fields. This leads to forests being cleared to allow for cocoa cultivation.
After five to 10 years, soil fertility dwindles and farmers move to the next fresh two to three acres of virgin forest to plant a new crop. This is replicated in many parts of east-central and western Côte d’Ivoire, leading to a growth of towns and villages in protected forest areas. For example, an illegal settlement of around 30,000 people was recently discovered in the Marahoué and Mont Péko national parks.
To diversify and increase their income, some farmers make profitable deals with logging companies and illegal timber traders to remove trees to make way for cocoa crops. This practice has proved more lucrative for farmers than cocoa bean production, making illegal logging arguably one of the country’s most prevalent and lucrative forms of organised crime.
Illegal logging has increased with the spread of cocoa farming countrywide. With funding from shadowy financiers, ‘artisans’ carry out logging in forests that cocoa farmers have targeted. In contravention of Côte d’Ivoire’s 2019 Forest Act, these loggers mill raw timber into semi-finished products at the felling site. Truckers move the cargo to markets in urban centres.
Côte d’Ivoire lost 47,000 hectares of forest in its cocoa belt in 2020 alone, a rate that experts argue could see a total depletion of the country’s forest cover by 2034. Illegal cocoa-related logging wipes out endangered tree species such as teak, framiré and gmelina, which are covered by strict international trade regulations. Illicit cocoa-related logging has also caused massive biodiversity and wildlife losses in Côte d’Ivoire, notably among elephants and primates.
Inconsistent enforcement of state regulations has left loopholes that illegal loggers exploit to go deeper into protected forests. Corruption and system weaknesses facilitate unlawful logging in areas designated for timber extraction, most of which are also cocoa-producing areas.
In 2019, a Wild Chimpanzee Foundation report revealed shortcomings at the Forest Development Corporation of Côte d’Ivoire (SODEFOR). These included logging beyond approved areas, irregular issuance of licences to log prohibited species, and authorising logging before doing an inventory and in the absence of a monitoring agent or transportation slips. SODEFOR was found to lack the capacity to track private companies’ activities and impose legal sanctions against infringements of the 2019 Forest Act.

In the absence of systematic law enforcement, illegal loggers produce most of the timber used across various industries, which strips income from the economy. The Ministry of Water and Forests estimates that illicit networks produce 15 to 30 times more timber than formally licensed traders, making illegal logging worth more than €33.5 million annually – about 7 per cent of the country’s GDP.
There have been international interventions to address cocoa-related environmental degradation, including illegal logging. Global consumer demand has led to the certification of cocoa, a new approach used by multinational companies to ensure sustainability. Incentivised by access to the international market, the approach has gained momentum among cocoa production cooperatives in Côte d’Ivoire since the late 2000s.
However, certification limits some cooperatives to niche markets such as fair trade or organic farming. Certification is also prohibitively expensive for most farmers and their associations. ENACT was told that farmers’ income from certified beans isn’t worth the effort to achieve certification. The Coopérative Agricole Mawobé de Yére Yére said demand from this niche market accounted for around 300,000 tonnes of Côte d’Ivoire’s annual production of over two million tonnes.
Côte d’Ivoire has made numerous official commitments to international standards that include the European Union Timber Regulation, the New York Declaration on Forests and other global initiatives. However, this high-level political will is undermined by weak law enforcement. Organised crime networks exploit fraudulent practices and corruption by officials who accept bribes at every stage of the timber supply chain, from logging to transportation and sale.
Also, the Forest Act prejudices local cocoa farmers interested in preserving forest land, say civil society groups. The law gives 24-year concessions to multinational chocolate-producing companies in some protected forest areas to encourage infrastructure development and farming practices that promote reforestation. But this could conflict with Article 12 of the Ivorian Constitution, which prevents rural land ownership by legal entities. By permitting such concessions, the Forest Act defeats the spirit of the constitutional provision.
Reforestation is addressed in the government’s 2018 Forest Preservation, Rehabilitation and Expansion National Policy. The policy aims to restore forest cover to 20 per cent of the national territory by 2030 in protected areas, which cocoa farmers are urged to move away from. It includes an ambitious €940 million master plan to deter cocoa-related deforestation and illegal logging.
The policy also seeks to discourage farmers from clearing virgin forests for cocoa cultivation and stimulate sustainable cocoa farming with mechanisms such as the Cocoa & Forests Initiative.

This ENACT article was funded by the European Union (EU). The contents of this article are the sole responsibility of the author and can under no circumstances be regarded as reflecting the position of the EU.
(This article was first published by ISS Today, a Premium Times syndication partner. We have their permission to republish).

Good journalism costs a lot of money. Yet only good journalism can ensure the possibility of a good society, an accountable democracy, and a transparent government.

For continued free access to the best investigative journalism in the country we ask you to consider making a modest support to this noble endeavour.

By contributing to PREMIUM TIMES, you are helping to sustain a journalism of relevance and ensuring it remains free and available to all.

TEXT AD: Why women cheat: what every Nigerian man should know