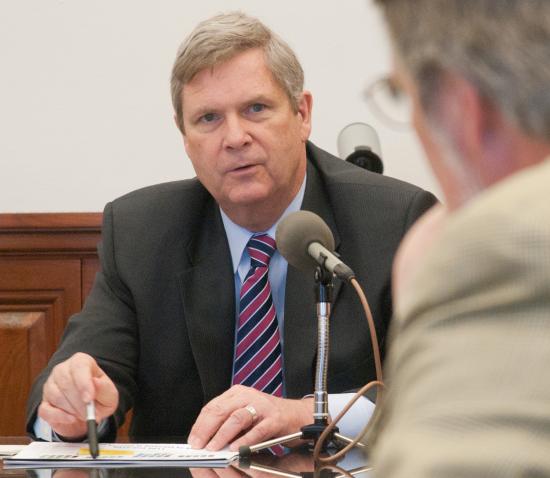 Canadian officials ought to be “capable of reading between the lines about what’s next, and maybe what’s next doesn’t have to happen,” he said during a teleconference. “I can assure you we are not going to give up on this.”

In the first dispute brought under the U.S.-Mexico-Canada Agreement, a three-judge panel ruled last December that Canada manipulated its tariff-rate quotas (TRQs), by making them available only to processors, in order to limit imports of U.S. dairy products. Canada agreed in the 2020 free trade agreement to expand access. The nations were obliged to negotiate a resolution with the United States having the option of retaliatory tariffs if they could not agree.

Canada’s international trade minister, Mary Ng, said Canada adjusted its dairy quotas to satisfy the USMCA ruling even if the United States did not like the result. The new dairy quota system eliminated TRQ pools reserved for processors — “the sole finding” against Canada, she said.

“We are confident that the new policies fully comply with the panel’s findings and its recognition that Canada has the full discretion to administer its TRQs under CUSMA (USMCA) in a manner that supports Canada’s supply management system for dairy.” said Ng on Monday. “We will always stand up for its dairy industry, farmers and workers and the communities they support, and at a time when global food security is under threat, it is even more important that we strengthen and maintain a strong and vibrant domestic dairy industry.

U.S. dairy groups said the time for retaliatory action arrived with Canadian publication of its new dairy quota system and the opening of an application period, through June 15, for a share of 2022-23 quotas. In the announcement, Canada linked dairy quotas with a moribund Biden administration proposal for tax credits of up to $12,500 to purchasers of electric vehicles made in unionized U.S. plants, which would potentially damage Canada’s place in the North American automobile industry.

“Please note that given Canada’s deep concerns with the discriminatory electric vehicle tax credits proposed in the Build Back Better bill under U.S. Congress consideration, a decision regarding the potential allocation of the previously unallocated quota under the 2022 CUSMA (USMCA) calendar year dairy TRQs will be taken as the issue evolves, but not later than July 31,” said the Canadian announcement.

“Retaliatory tariffs are both fair and necessary in this circumstance,” said Krysta Harden, chief executive of U.S. Dairy Export Council, a trade group. “Unfortunately, Canada simply refuses to institute real reform and such actions must have consequences.” Unless there is retaliation, said the National Milk Producers Federation, U.S. trade agreements would be toothless.

Besides retaliatory tariffs, the Biden administration should consider a WTO challenge of Canadian quotas on milk protein imports, said the International Dairy Foods Association. “Our government must hold Canada accountable,” said IDFA chief executive Michael Dykes. “We are pleased to see USDA responding forcefully and hope that USTR does the same.”

U.S. dairy exports were forecast at $7.8 billion this fiscal year by the USDA. Mexico and Southeast Asia are the top export markets, with Canada in third place early this decade, according to the Dairy Export Council.

The United States and Canada have quarreled for years over access to Canadian consumers. The USMCA created 14 separate dairy tariff-rate quotas for U.S. dairy products. A tariff-rate quota allows a specified volume of a product to enter a country at no or low duties, with higher tariffs imposed on volumes above the threshold. One analyst said the pact gave U.S. dairy access to 3.59% of the Canadian market.

“We were greatly disappointed with Canada’s response,” said Vilsack. As an example, he said Canada did not make the quotas available to retailers. “This message was delivered emphatically,” he said, to Canadian agriculture minister Marie-Claude Bibeau on the sidelines of the G7 agricultural ministerial meeting in Stuttgart, Germany, over the weekend.

Canada was forecast to be second to Mexico in food and agriculture trade with the United States this fiscal year.