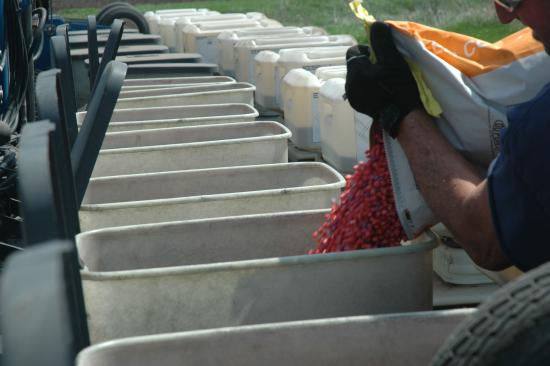 Global food shortages are a real possibility as a result of the Russian invasion of Ukraine, President Biden told reporters while meeting with allies in Brussels on Thursday. Western leaders, including European Commission President Ursula von der Leyen, joined Biden in saying they would step up their hunger-relief programs and encourage their farmers to grow more food.

“Yes, we did talk about food shortages. And it’s going to be real,” said Biden during a news conference. “The price of these sanctions is not just imposed on Russia, it’s imposed upon an awful lot of countries as well, including European countries and our country as well.”

Leaders of the House Agriculture Committee urged the administration to use money from a USDA hunger reserve, the Bill Emerson Humanitarian Trust, to supplement U.S. food aid programs. “Supply shortages or increased prices will disproportionately impact developing and middle-income countries that rely heavily on imports of food,” they said in a letter. There was more than $260 million in the trust last year.

Russia and Ukraine are among the world’s largest exporters of wheat, and Ukraine is a top corn exporter. Warfare and economic sanctions were expected to sharply reduce grain exports in the near term and suppress crop production this year. An additional 13 million people around the world could be pushed into hunger because of high food prices and supply disruptions caused by the war, said the UN Food and Agriculture Organization last week. The global hunger rate of 9.9% was already the highest in 13 years, due to the pandemic.

Biden said that the United States and Canada, two of the world’s agricultural powers, “both talked about how we could increase and disseminate more rapidly food” during a meeting of the Group of Seven industrialized democracies. G7 leaders said they would “monitor the situation closely and do what is necessary to prevent and respond to the evolving global food security crisis.”

In a joint statement, Biden and von der Leyen said, “We commit to redoubling our combined efforts to provide direct food aid and other forms of assistance, where warranted, and to continue the necessary support for agricultural innovation and sustainable productivity growth to ensure global food security, while balancing enhancing climate resilience and reducing agricultural greenhouse gas emissions.” The EU and the United States are global leaders in food aid.

“We are also identifying tools in the U.S. government’s existing food security tool kit and determining whether programs are fit for purpose for this situation and will make strategic adjustments as needed,” said the statement.

The president announced an additional $1 billion in humanitarian assistance “for those affected by Russia’s war in Ukraine and its severe impacts around the world, including a marked rise in food insecurity, over the coming months.” The White House said the United States provided $4.6 billion in food aid and nutrition assistance in 2021.

Wheat exports by Russia and Ukraine could drop to a combined 20 to 22 million tonnes in the year ahead, less than half of the shipments forecast by the USDA for the current marketing year, said Dan Basse, head of AgResource Co. during a webinar on Tuesday. Basse said the invasion was “the biggest supply shock to world food supplies since World War I.”

The European Commission decided this week to allow European farmers to plant crops on fallowed land to, in the words of Agriculture Commissioner Janusz Wojciechowski, “respond to the global needs for food.” Seven U.S. farm and food processing groups suggested that the USDA allow crops on 4.1 million acres of high-quality land now idled in the Conservation Reserve.

The transcript of Biden’s news conference is available here.

The White House fact sheet on additional aid to Ukraine is available here.