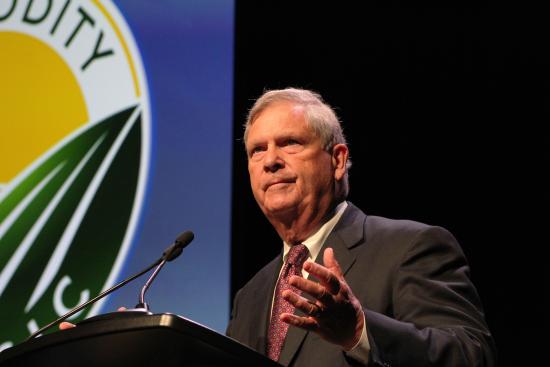 Secretary of agriculture Tom Vilsack made three announcements at the 2022 Commodity Classic held in New Orleans, Louisiana earlier this month. The event was his second large public address since returning to USDA leadership in February 2021.

“We need to grow this economy from the bottom, up and the middle, out,” Vilsack said echoing recent remarks by President Biden. “I believe American agriculture can lead that effort.”

Farmers need more, new, and better markets so they can benefit from the value and wealth American agriculture creates, Vilsack said. “For far too long we’ve had an extraction economy where your hard work results in wealth and opportunity someplace else,” he told the auditorium of farmers.

Vilsack encouraged diversification of export partners as one way to bring back more money to rural communities. Trade with China will require a strategic and thought full approach, going forward, he said.

“Before the trade war and pandemic, the United States represented roughly 25% of all exports of agricultural products into China. In other words, 25% of their agriculture inputs came from us,” Vilsack explained. “During the course of the trade war, they began a systematic process of reducing their reliance on the U.S. We entered into an agreement to restore some sense of balance; they began to buy product again. But it now only represents 18% of what they import.”

As part of the USDA’s efforts to diversify trading partners, Vilsack recently traveled to Dubai for the department’s first face to face trade mission in two years. Twenty-five companies, eight state agriculture department leaders, and several cooperator groups held 300 meetings in less than a week as part of the trip.

“I am confident from those 300 meetings we’ll be in a position to sell more,” said Vilsack, noting he anticipates record exports this year. Considering this goal, the Vilsack announced the USDA is sponsoring four more international trade missions in 2022.

The department reports U.S. agricultural exports reached an all-time high in 2021, topping $177 billion. There were 28 markets, in every corner of the globe, where those exports exceeded $1 billion.

“I understand and appreciate the fact that we are frustrated by the fact that ports on our west coast in particular have watched ships with empty containers leave the ports,” Vilsack continued explaining USDA has made an arrangement with the Port of Oakland to incent and encourage those containers to be filled with American agriculture products. More opportunities for other ports are expected to be announced soon, he said.

“There’s no reason in the world why any container leaving our ports should be empty,” Vilsack said.

Vilsack pivoted from trade to more domestic issues of consumer questions and marketing by food companies. Companies are trying to call their products climate friendly and sustainably produced without any real standard as to what that actually means, the secretary continued.

“At USDA, we believe that farmers should take full advantage of that higher value opportunity and ought to be leading that effort,” Vilsack said.

“America’s farmers, ranchers, and forest owners are leading the way in implementing climate-smart solutions across their operations,” said Vilsack when the $1 billion fund for pilot projects was announced. “Through Partnerships for Climate-Smart Commodities, USDA will provide targeted funding to meet national and global demand and expand market opportunities for climate-smart commodities to increase the competitive advantage of American producers. We want a broad array of agriculture and forestry to see themselves in this effort, including small and historically underserved producers as well as early adopters.”

Funding will be provided to partners through the USDA’s Commodity Credit Corporation for pilot projects to provide incentives to producers and landowners to:

Since February, USDA officials have heard from many stakeholders that an extension would allow them to prepare more robust applications to further development of climate-smart markets for a diverse range of producers. While at Commodity Classic, Vilsack announced extensions to the application period.

USDA has provided a website with answers to frequently asked questions with more details.

Finally, Vilsack wrapped up his time on stage with one more announcement. “I think it’s fair to say you all are suffering from some serious issues with reference to fertilizer costs,” said Vilsack.

The secretary continued, “I think we have to recognize that we’re too reliant on outside sources of fertilizer and the ingredients of fertilizer. We rely on countries that may or may not agree with us on a variety of issues. We’ve had this incredible efficiency based on this global system that we’ve put together, but we forgot about resiliency.”

In an effort to jumpstart the independent production of fertilizer domestically, USDA will make $250 million in grants available.

More details about the grant application process will be announced later this summer. The first awards are expected to be distributed before year end.