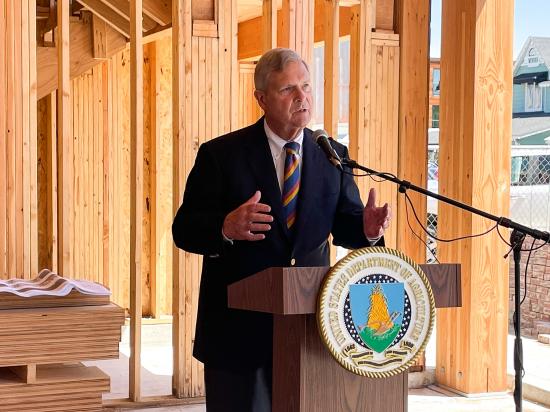 The Biden administration has set aside billions of dollars to help the nation’s food supply chain recover from the coronavirus pandemic — and, more recently, the looming global effects of Russia’s invasion of Ukraine — and on Wednesday, it announced new funding and a comprehensive overview of how those initiatives mesh.

“A transformed food system is part of how we as a country become more resilient and competitive in the face of these big and future challenges and threats,” U.S. Secretary of Agriculture Tom Vilsack said Wednesday at Georgetown University in Washington, D.C.

The nation’s meat processing capability has been a primary focus since the pandemic exposed its deficient resiliency, in part because of the industry’s consolidation over the years. The top four meatpacking companies control 85% of the beef market, 70% of pork, and more than 50% of chicken, the White House has said.

As a result, when large processing facilities were halted by the spreading coronavirus, livestock producers lost a significant amount of their sales markets, and some were forced to euthanize their animals.

“This happened in Iowa,” Vilsack said. “A processing facility shut down because the company just didn’t pay attention to the pandemic. Too many of their workers got sick, and some of them tragically died. So they had to shut the plant down. When they shut the plant down, the farmers had no place to market their hogs.”

The consolidation of meatpacking was the result of a push for efficiency, but the pandemic has shown that it needs to be balanced with resiliency, Vilsack concluded.

In response, the USDA created the Meat and Poultry Processing Expansion Program to provide up to $375 million to aid the creation or expansion of smaller, independent processors. The first phase of the program that recently closed for applications is poised to distribute about $150 million in grants. Funding requests totaled more than $800 million, the USDA reported.

That program fits into the “processing” category of the USDA’s newly announced Food System Transformation framework, which targets four aspects of the food supply: production, processing, distribution, and markets.

Vilsack announced a new $300 million program on Wednesday to help farmers transition into organic agricultural production. That includes establishing a mentoring program that pairs beginning organic farmers with experienced ones and provides some financial assistance with the initial costs.

Agricultural land typically undergoes a three-year transition period to organic. During that time, crops are raised with organic practices but cannot be sold as organic until the end of that period. Vilsack said part of the newly announced program will expand the markets for organic food. The USDA had previously earmarked $20 million for similar assistance.

Other notable announcements on Wednesday included:

A fuller account of the USDA’s programs to transform the nation’s food supply chain is here. The USDA also plans to spend up to $400 million to create a network of “food business centers” that can help people navigate the federal assistance that is available to them.