Who will buy Southeast Cotton Gin? 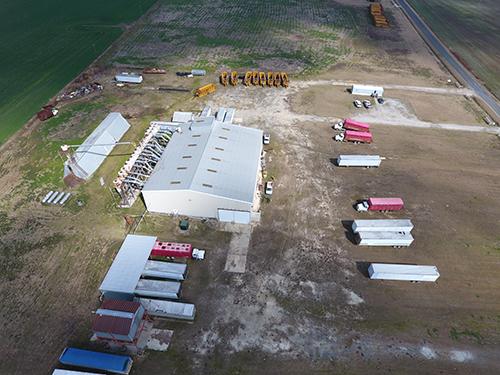 The Lake City, South Carolina Southeast Cotton Gin that went unused in 2021 is up for sale. Whether it’s worth more than $2 million or $200,000 is up for debate, but you’ll get an answer May 25 at 2 p.m. (ET) when the bids for the gin, along with several trucks, trailers, two warehouses, and numerous large rectangular “modules” that aggregate harvested cotton, are opened at the sealed bid auction.

That a gin and related equipment are being sold this way is somewhat unusual. It’s even more surprising because the cotton market has been in a general upward trajectory for two years. Since last July, cotton prices have risen to more than $1.60 per pound, up from 90 cents per pound last summer.

How gins are typically sold

Normally gins are sold while still in operation to other gin companies or maybe a group of farmers looking to combine and market their harvests. The latter is Jim Holtz’ wish. He hopes a farmer group wanting to shape its financial destiny by aggregating, processing, and selling its own cotton will see the Southeast Cotton Gin as a viable option.

“To reproduce this operation today would cost millions of dollars,” says Woltz of Woltz Associates of Roanoke, Virginia, a real estate brokerage and auction company. “Ideally a group of farmers would buy this operation. And the cotton seed is a good byproduct of ginning the cotton, used for cattle feed.”

Woltz Associates is conducting the auction along with the national farm real estate company and auctioneers, Murray Wise Associates LLC.

Why didn’t the gin operate in 2021? And why isn’t there already a buyer in this robust cotton market?

1. The Southeast Cotton equipment is rather old. The gin was built more than 50 years ago. While the basics of how a cotton gin operates has changed little over the decades, there have been technological advances that allow ginners to extract even more useable cotton all the time. And newer equipment runs faster, allowing more cotton to be produced in less time. Southeast Cotton could produce about 20 bales per hour while the more modern Humphrey Coker in nearby Kingstree can produce 50 bales per hour.

2. Gins are a very communal, almost social institution—a hub run often by friends and neighbors around which business is conducted. Until the past couple of years the long-time manager of the gin, Buddy Brady, was just that fulcrum, by all accounts an excellent ginner that everyone knew and trusted with their crop. When he retired, long-term replacement couldn’t be found, resulting in last year’s shut-down.

3. Southeast Cotton Inc. wasn’t owned locally. Five years ago, the gin was purchased by Justice Companies, a conglomeration of mining and agriculture enterprises in several states owned by West Virginia Gov. James Justice and family members. A colorful and often controversial figure—Forbes magazine once dubbed him “The Deadbeat Billionaire,” due to the unpaid bills left in his wake — Justice’s ownership of the gin wasn’t’ an issue when the manager was a trusted long-time local.

4. The competition for ginning business in the region increased. In the past two years, the Tri-Cotton Gin in Kingstree was purchased by Humphrey Coker Seed Co., which invested money to upgrade equipment. When Southeast Cotton didn’t operate in 2021, many of those farmers moved their business to Humphrey Coker.

Humphrey Coker’s Keith Gill says he recently took a representative of a South African company to evaluate Southeast Cotton. Given the age of the equipment there, that’s the only type of sale Gill envisions. Southeast Cotton’s equipment may be too old to compete in the U.S.

Gill himself queried Justice Companies to see if they might sell Humphrey Coker some equipment — like trucks and the warehouses — separately. The response he received indicated any sale would include everything, and the price would be more than $2 million.

One area farmer, who asked that his name not be used, says cotton acres fluctuate depending on grain prices and, of course, input costs. “Cotton is holding its own right now,” he says, “Acres here may be up a bit this year.” Still, he says, the existing gins owned by Humphrey Coker are more than enough to process what is produced in the region.

Anthony Ward, another area farmer who did business at Southeast Cotton for years, says that when cotton prices go above $1 per pound, the use of synthetic fibers in clothes increases. And almost no synthetic fibers are manufactured in the U.S. The risk is too great, Ward says, and the market is shrinking.

“I wouldn’t take millions of my own money to buy that gin even if I had experience running one,” he says. “My competition [Humphrey Coker] just took the customer base, so my potential customers aren’t there anymore. I wouldn’t touch it with a ten-foot pole.”

Optimism for the sale

Among the assets for sale at Southeast Cotton are 25 “module builders” or large frames that help create huge rectangular bales that can be loaded onto semi-trailers. In recent years, according to the unnamed farmer, many producers have shifted to using balers that produce smaller, wrapped, round cotton bales.

“My feeling is modules are kind of on their way out,” the unnamed farmer says. “There is still some demand for modules but not like it was.”

Likewise, the gin stands at Southeast Cotton, the key piece of equipment that uses a series of saws to separate the seeds from the lint, were made by the Murray Company, which ceased doing business more than 40 years ago.

Still there is optimism for the sale. “This gin [Southeast Cotton] had the reputation for producing some of the better-quality cotton,” Woltz says.

The demand for cotton remains, according to USDA’s outlook report in February. Global cotton consumption is expected to exceed production this year, which will reduce world cotton stocks by 2.5 million bales. While production will be up this year in response, China’s imports (They are the biggest cotton producer in the world.) will rise beyond last year’s levels. The department still forecasts prices to decline 30 cents to 95 cents per pound.