Worst U.S. outbreak of bird flu in seven years fades in May 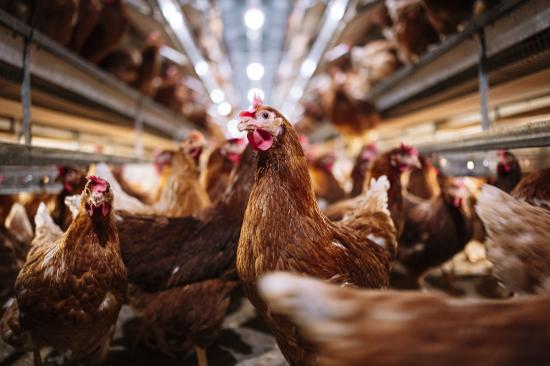 Nearly 38 million birds in domestic flocks have died in outbreaks of highly pathogenic avian influenza (HPAI) from coast to coast since early February, but USDA data suggest the threat is fading. With one day to go in May, losses for the month were on track to be the smallest of the year. A viral disease that spreads best in cold conditions, bird flu typically dissipates with the arrival of consistently warm weather.

All the same, Agriculture Secretary Tom Vilsack transferred an additional $400 million to the USDA agency responsible for protecting animal health on Friday. The transfer doubled, to nearly $800 million, the money available for fighting HPAI and indemnifying owners of commercial flocks.

Egg-laying hens, 28.8 million in all, accounted for three of every four losses to HPAI. The number of layers in the U.S. flock was down by 6 percent compared to a year ago because of bird flu. Often volatile, egg prices at the wholesale level soared to nearly $3 for a dozen Large eggs in the week before Easter, double their price at that point in 2021, but were trending downward. The nationwide wholesale average price was $2.48 last week.

A USDA running tally said 780,000 birds in commercial flocks died of HPAI or were culled so far in May, compared to 1.49 million birds in February, 20.96 million in March and 14.73 million in April. Only two outbreaks were reported on egg farms, totaling 151,000 hens in Pennsylvania, during May. Going into the Memorial Day weekend, the most recent large outbreak was a turkey farm in Dakota County, Minnesota, where 57,000 turkeys were being raised for human consumption.

The last detection of HPAI during the 2014-15 epidemic, arguably the worst animal disease outbreak in U.S. history, was on June 15, 2015, at an egg farm in Iowa. Some 43 million laying hens and pullets died along with 7.4 million turkeys.

“Control measures, along with an increase in warm weather, ultimately interrupted HPAI transmissions, leading to a half of new cases in June 2015,” said a USDA report in 2016. “The response effort involved over 3,000 federal, state and contracted personnel, with nearly $850 million obligated for indemnity payments and response activities.”

HPAI is highly contagious and can wipe out a flock quickly. When the disease is confirmed, agricultural officials cull the infected flock and quarantine nearby poultry farms to try to prevent the disease from spreading. During the 2014-15 epidemic, poultry barns were cleaned and disinfected after the flocks were killed. On average, said the USDA report, it was 111 days from detection of HPAI until a poultry farm was granted approval to restock with new birds.

Poultry farmers overwhelmingly chose “the most inhumane method available to kill their flocks,” a method called ventilation shutdown plus heat, during February and March when HPAI was discovered, said the anti-cruelty Animal Welfare Institute. “In the current outbreak, killing birds by inducing heat stroke — once considered an option of last resort — has become the default because producers can’t destroy massive numbers of their animals fast enough to control the spread of disease.”

The most common method of culling chickens during the 2014-15 epidemic was to pump carbon dioxide into poultry barns. For turkeys, the common approach was to cover the birds with a water-based foam. The 2016 report said producers needed an average of 15.4 days to depopulate layer flocks “due to flock size and difficult conditions.”